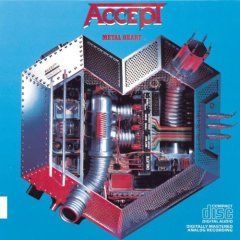 The Washington Post recently had an interesting article entitled, His Heart Whirs Anew, about a Peter Houghton, the first lifetime recipient of a Jarvik 2000 ventricular assist device (ie an artificial heart).

Strangely, the article never mentioned this rather obvious probable cause. Peter Houghton is a psychologist himself, so you’d think he’d be familiar with the James-Lange theory, which says that we experience physical arousal, and interpret this arousal as emotion. Alas, he’s a Jungian psychologist and a devout Catholic, which is potentially distorting his view of things.

Why blame the cart, when the horse has been replaced with a horse-droid?

As a Jungian psychologist and devout catholic, Houghton seems to view his artificial heart as symbolic entity effecting his soul rather than a physical one effecting is limbic system. In his search for a cause, he rambles on about becoming an “invented person trying to cope with it, trying to deal with the emotional context of it.” He also says that he now feels a certain emotional distance from those close to him and says he’s more cautious about his own emotions and tries not to invoke them.

Granted, this all could be simple post-operative depression and his obtuse search for meaning might actually further drive him into depression. He did go though a period of clinical depression with some suicidal thoughts. However, it’s also likely that this depression was precipitated by the mechanically steady heart shutting down of the sensory feedback so important to emotions.

Much like Capgras Delusion, where people are seen as impostors due to the lack of emotional recognition, his feelings of emotional distance are probably caused by a loss in empathy. While a smile from his grandchild may trigger his mirror neurons to create a shared emotional state, his heart remains steady as ever putting a halt on the emotional arousal. Thus, he rationalizes that his grandchildren should make him happy, but it’s not so he rationalizes that those close to him “can do without you.”

True it’s hard to tease this symptoms apart from general depression. Also this hypothesis is slightly weakened, as Johan Carlin points out by the fact that changes in pulse rate are more strongly effected by fear than happiness. The WP article does not discuss any other symptoms, so we really don’t know if he’s experienced this reduction in the sense of fear. It would be interesting to test his fear arousal state — but potentially useless without having test results from before the surgery.

Still I believe that his mechanical heart had some physical effect which flattened his emotional state. If we were all coldblooded and callous, we could of course test this by implanting some people with a mechanical heart and have a control group implanted a fake mechanical heart. However I somehow doubt that experiment would get past the IRB.

After writing this, I discovered that The Pineas Gage Fan Club wrote an excellent post discussing Houghton’s artificial heart and the James-Lange theory, entitled ‚ÄúFeel the heat‚Ä¶ skips a beat‚Äù or the other way around? It’s a good writeup — better in some ways than mine — and I highly encourage that you read it.