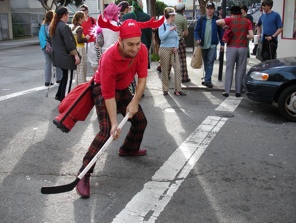 I’m still experimenting with blogging apps. This time posting with Ecto. It’s rather nice though a bit complicated possibly for the average user — especially since I had to troubleshoot it. I do like how much control you have over the image code, which makes using my wordpress lightbox plugin easy.

I tested MarsEdit too which is much cleaner, but really only good if you want to post text only as adding images takes waaaaay too many steps. MarsEdit’s live preview is great as long as you know your way around html/css to set it up (which is strangely complicated considering that the rest of the app seems set up for the average user). On the opposite end of the spectrum is Journler which seems just plan convoluted looking.

While Ecto is nice, personally, I think I’m still gonna recommend Flock just because of the easy Flickr interface. Ecto does have an app called 1001 which sounds great app but it was really really slow at loading anything. So Flock it is.

Actually, I’m also gonna start to use it at work as my blogging/social/lunch-break browser, and keep Firefox as my development/work only browser. I figure this will hopefully help me focus more on work and curb any procrastination.

p.s. that picture is one of my favs from Urban Golf.