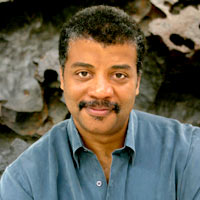 The subject line quotes a recent twitter made by a friend of mine and I couldn’t agree more. Neil deGrasse Tyson, is the exuberant astrophysicist who is the host for NOVA Science Now and the director of the Hayden Planetarium. He explodes with a passion for the mysteries of the universe in a way only an atheist could. His cheerful enthusiasm for science is contagious and in that way many have compared him to the late Carl Sagan; however, Tyson is really a unique figure.

One of my favorite blogs One Good Move recently posted a great video clip from Neil deGrasse Tyson’s recent interview on the Daily Show. He was also previously interviewed on the Daily Show in January of this year for his book Death by Black Hole: And Other Cosmic Quandaries.

Neil deGrasse Tyson was also a speaker at the Beyond Belief 2006 conference. I know I’ve mentioned this conference before, but I feel the need to mention it again. I seldom watch many things more than once, but I find myself going back and listening to Neil deGrasse Tyson the most. His rebuke to Dawkins (short and poignant), his connection between art and the love of science (16min speech that is absolutely amazing and energizing), and much more on YouTube are all worth watching.

In my book, he’s right up there with Buckaroo Banzai.