Dave Pell has an excellently written, if slightly melodramatic, post on forgetting telephone numbers, My Head is in the Clouds:

“…My head was once filled with bits and pieces of information like phone numbers, to-do lists, and addresses. I’ve ceded that responsibility to technology. Last summer, I forgot my friend Norman’s birthday. We’ve known each other since elementary school.

…Now, after a few years of this, I realize that when I look up from the screen I know almost nothing. And maybe that would be fine if the absent phone numbers and upcoming dates were freeing space for deeper and more introspective thought.” 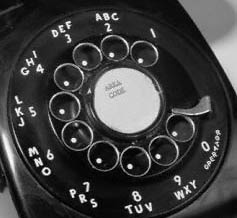 While the picture he paints is engaging and on the face of it convincing, he needs to get off the hyperbole horse. Seriously, think about it, how many phone numbers, addresses, birthdates, etc. did you use to remember?

Personally, I never had more than 3-5 phone numbers memorized at a time, but then again why would I have to? Pre-cellphone, the only place I’d normally make calls is from home where I had my address book; if I was out and about usually the only number I ever called was home. It’s only since the invention of the cellphone, where every single person we know has a phone number and we call people all the time from anywhere, that we need to have phone numbers with us at all times.

These days the only addresses I remember fully are my work and my home, but this really isn’t any different than before. I still manage to get to places just like I always have without an address, by remembering the street and knowing what their house looks like.

As to birthday’s, well I never had much of a head for dates so I never remembered more than my family’s birthdays and if I was lucky the person I was dating. Pell lamented forgetting his friend Norman’s birthday who he’s known since elementary school. He blames this on the fact that he’s grown used to being reminded of birthdays via facebook/twitter/etc and Norman isn’t as active online. But is this really the reason? When you are a kid, birthdays are huge deals, but when you get older they tend to pass on by. They become less important, with less celebration, and thus less reason to remember them.

Pell speaks of freeing up space like the brain is a computer with a limited hard drive, but this is not how memory works. The fact that we no longer remember phone numbers is not because technology has made our brains lazy—it’s because we don’t physically dial numbers any more. There is no data being off loaded; we are not freeing up storage. It’s just not something we do and without doing there is no memory. If Pell wanted to, he could start remembering phone numbers again by dialing it using the key pad. Just like he could reinforce the memory of Norman’s birthday by planning a birthday party for him next year.