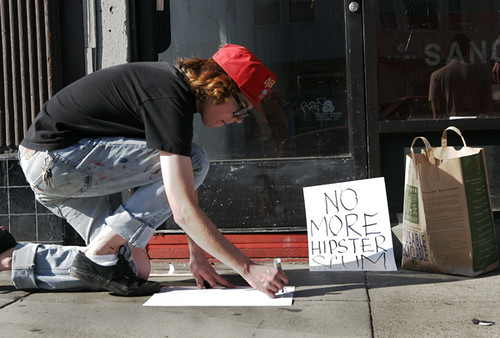 Valencia was never the same after January 30th 2009. The day that will live in infamy quickly became known as the Valencia Hipster Irony Implosion.

When the boy in the red trucker hat picked up the “NO MORE HIPSTER SCUM” sign suddenly a flash of white — and I mean WHITE — light enveloped the entire block of Valencia between 20th and 21st street. Little was left undamaged after the irony implosion. Windows were busted, the protest signs burst into flames, and boy in the red trucker hat completely vanished. His friends all died shortly thereafter. Most were suicides, but others died mysteriously.

Somehow, Gretchen Robinette, the photographer who took this picture is still alive — sadly she can no longer take any photos without breaking down in tears. Unable to completely put her camera down she still gets by with the occasional photo of a puppy or baby.

To this day, the 20th St block of Valencia stands empty. The aftershock of what happened shook the area hard — people left, stores closed. The seats in ATA were even more barren then usual. At the Whole Foods store across the street, organic vegetables and fruit began to rot in the stands. Patron’s stopped coming to Dosa, saying that their idlis suddenly seemed too white and never quite tasted the same again.

A shrine now stands at that fateful location — ground zero of the Valencia Hipster Irony Implosion — on the side of a building, this very photo is posted and beneath a pile of offerings can be found: trucker hats, black shades, white belts, worn sneakers, and t-shirts with obscure references to the 70s and 80s.