Yesterday, Danish authorities recently arrested three people allegedly plotting a “terror-related assassination” of Kurt Westergaard, the cartoonist behind the drawing shown below — one of several printed controversially in September of 2005. Today, newspapers across Europe have reprinted the cartoon to show support for Westergaard and for freedom of speech.

Representatives for the Danish newspaper, Berlingske Tidende, stated, “We are [reprinting the cartoon] to document what is at stake in this case, and to unambiguously back and support the freedom of speech that we as a newspaper always will defend.”

Sadly, Westergaard’s life has been completely disrupted by this simple little drawing. He states, “I could not possibly know for how long I have to live under police protection; I think, however, that the impact of the insane response to my cartoon will last for the rest of my life,” he said. “It is sad indeed, but it has become a fact of my life.”

I thought I’d show my own support by posting the cartoon and add a bit of equal opportunity blasphemy with this classic by Serrano Andres. 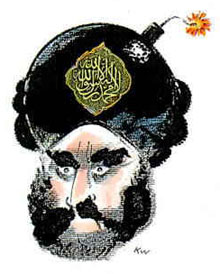 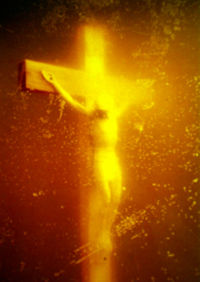