Been in self tech support hell lately. A couple weeks ago, a power outage switched off my external drive in the middle of it being used which destroyed the file hierarchy. For various reasons it took about a week to recover all the data which didn’t live elsewheres. I restored the hard drive and copied everything back on to it.

Then just a couple days ago, my laptop froze up and then refused to boot again. I launched it in firewire target disk mode — which thankfully worked — attached it to Nifer’s machine, and backed up everything in my home folder to my external. Then I rebooted with a bootable DiskWarrior cd and set it to repair. This seemed to work. My machine booted, I immediately installed superduper and did a full clone of my laptop.

The next day, it froze again. I ran DiskWarrior again and it repaired a couple useless permissions but that was about it. Interestingly, it would boot in safe mode fine, but normal boots always resulted in either a generic lockup or this lovely corrupt stack kernel panic message: 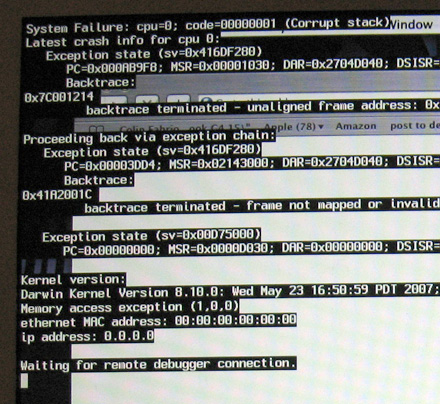 Last night, I tried doing a fresh install of the operating system just in case. Unfortunately, the install process just errored out every time.

At this point, it’s looking like a hardware issue, so tonight I’ll run TechTool on it.

I’m glad I can do my own tech support, but I really wish I didn’t have to — I don’t have time for this.

UPDATE: TechTool was worthless as it said everything was peachy. I tried removing the one 3rd party RAM chip I have in there and sure enough that seems to have done the trick so far. Install completed fine and it loaded alright. Now I’m just restoring block-level from my superduper backup as I figure it wasn’t a software problem.

I’ll need to get some more RAM though as 256MB is just not enough. Interestingly it says lifetime warranty on the chip so I’ll have to look into that.