Everyone should know the tale of the Great Arkham Christmas Tree Disappearance! Here it is as imparted to me by my great uncle Sir Colin Arbuthnot…

It was a cold and blistery morning in Arkham. The snow was almost gray and it whipped through the streets like angry ghosts blown by a wind so fierce it felt like the houses couldn’t stand much more. That morning every citizen in Arkham awoke to an emptiness where their joyful Christmas tree should have been. If it had just been one family’s tree it would have been sad, if their neighbor’s trees were gone too it would have been tragic, but it was not just one tree or a dozen trees, every single christmas tree in Arkham was missing‚Äîand that is enough to chill any man or woman to the bone!

Even more horrifying was what the town residents didn’t know. All the trees had been stolen in the middle of the night by members of an insane cult. The cult members snuck into every home in Arkham and hauled the trees to their secret lair. The trees and the joy they contained were set to be burned in a great bonfire in order to call forth their great god Cthulhu.

Then with the stars shining down, as the cultists began thier great rite, a great tentacled mass came swooping down from the Heavens. It was the Flying Spaghetti Monster! And he was here to save the day! The tentacles whipped out and snatched each and every evil cultist before they could run away. Pirates then came out of nowhere, chained the cultists in leg irons and carted them off.

The Flying Spaghetti Monster wasn’t done however for Arkham’s homes were still missing their trees. So with just the flick of a spaghetti tentacle, a tree materialized in every home in Arkham, and every tree was even bigger and more beautiful than before! 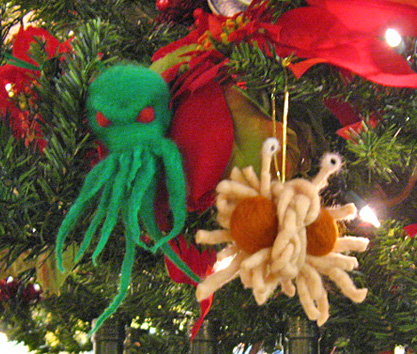 You too can decorate your yule tree like the townsfolk in Arkham! NifNaks makes Traditional wool Flying Spaghetti Monsters and Chuthlu Ornaments.