I am privileged to be surrounded by cameras. Part of this is a reflection of our digital age with cameras in every cell phone, portable computer, and cereal box; however, mostly this is due to the amazingly creative community I live in. Whenever I organize an event like the Tweed Ride or Balsa Man, or whenever I craft a costume for grand spectacles like the Gorey Ball, there is invariably someone with DSLR and talent nearby.

I take this privilege for granted more than I really should. Without these creative individuals, with their photographic talent, many of my creative whims would be lost to the fragility of memory and the cardboard boxes of storage. Therefore I have decided to dedicate a series of posts to the masters of the shutter who craft tangibility out of fleeting moments‚ especially to those who make me look good.

This is the first in a series…

This photo taken during [Prim Queer Tea 2008](https://catcubed.com/2008/09/13/prim-proper-queer-tea-party-folsom-street-fair-2008/) is my most favorite recent photo of me. It was taken by the amazing [Neil Girling](https://theblight.net/) (aka [Mr. Nightshade](https://www.flickr.com/photos/carnivillain/)). 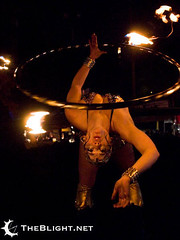 Neil Girling has this magical ability to walk up to people and snap a photo, slinging his huge DSLR like it’s a small P&S, capturing the moment with the perfect balance of light, framing, and background. The above photo is a great example of this with the subtle yet striking shadow of the hat that falls across my face and lines of the windows behind me that adds depth but doesn’t serve to distract from the foreground elements. Even small elements like the Folsom Street Fair sticker that peeks over the saucer seem perfectly placed.

It’s unsurprising that several of my favorited flicker photos are his. For instance, when we went to the Dicken’s Fair, Neil took a fantastic photo of Slim, Nifer, and myself in our Dicken’s wear. Also, he was there with his camera while I was whittling away with balsa wood at Balsa Man Decompression.

If you haven’t really looked at his portfolio before, I highly recommend Neil Girling’s recent photos of the majestic Gorey Ball. He is also known in our community for his amazing ability to capture seemingly uncapturable dynamic acts such as the Vau de Vire Society and Gooferman. I also recommend that if you are organizing an event that you hire him to cover it ‚Äî seriously you won’t be disappointed.

Errata from Tweed Ride: The above Prim Queer Tea Time photo was also used by me on the flyer for my recent Tweed Ride, which if you received a flyer will notice that I accidentally failed to attribute him on. I can only say that I was rushing to create the flyer at 1am, but really I should have attributed him, and I humbly apologize for this grievous omission as he truly deserves credit.