So I got hit by a car on Friday of last week. Typical frantic mother deciding last minute to pick up cough meds for her daughter. She pulled into a parking spot right in front of me. Thankfully, I was able to stop in time so as I didn’t go flying into her car. Still my front wheel tacoed and I dropped to the ground giving myself some quality road rash on my elbow.

She was nice, drove me to work, and she’ll pay for all damages. Turns out that the damages are just to the front wheel, but I’ve got decent rims so that turns out to be a decent amount. I was already leaning towards looking at a new bike sometime this year so I decided take a gander on craigslist to see if there was anything interesting. As it turned out there was. A total drool-worthy bike right up my alley — so I went ahead and did it using the repair money towards this new bike instead. I figure I’ll slowly repair the old bike and sell it or use it as a second bike. 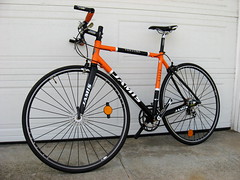 I’m really happy with my new bike and it’s frankly a bit 1 level higher quality overall then what I was looking for originally. It’s pretty and therefore solidly a target, so I’ll need to upgrade my locking standards. It’s also a bike that goes against almost everything jwz says about proper bicycle commuting, but then again I’ve been bicycling for years in San Francisco too so I’ve built up my own share of opinions on bicycles, commuting, and utility bicycling.

When I first started writing this post, I had thought I would craft a similar advice list discussing where I agreed/disagreed with jwz; however, as part of this is about upgrading my own bike I thought I’d create a list for intermediate level utility cyclists — which will be the focus of my next post.