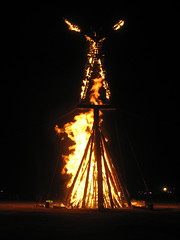 With a red eclipsed moon in the sky, a person set forth to burn the Man early. The fire was extinguished, but the Man was a shadow of his former self, and a decision was made by the Man Krew to once again get to work rebuilding it. I was fortunate enough to participate in the rebuild — it was an amazing team of individuals and honestly one of my best experiences ever in the Black Rock Desert.

The controversy surrounding the early burn was one of the most talked about events on and off the Playa and it appeared across several news outlets. Unfortunately most of the gossip and coverage has surrounded the man responsible, Paul Addis, rather than the efforts of the rebuild team and effects it had on the event as a whole.

Paul Addis has been interviewed a few times already, yet he has yet to present a clear reason for his act. Mostly his interviews just come off as rambling screeds of jaded narcissism. He himself has not been to the event since 1998, and yet he seems fit to rant that “Burning Man doesn’t accomplish anything anymore. What do we get out of Burning Man? Nothing.”

What the hell is the we he’s talking about? My first burn was in 2002. I’ve gone every year since — not for the party, or the man burn, or the BMorg, but because of the creative inspiration, empowerment, and fulfillment I get from the community. By the community, I mean the 5% of people who still make shit happen: the artists, the performers, the cooks, the camp organizers, the pranksters, the city builders, and hell even the fucking rave camps. Over the years, I’ve become friends with several of these people and even participated myself in several ways. As a result, I’ve gotten a whole lot out of Burning Man — or else I would have stopped going long ago.

Frankly, Paul Addis stopped being one of those 5% a long time ago. His jaded empty diatribes don’t relate to me or any of my burner friends whose Playa experiences began after Addis stopped going.

Addis doesn’t represent me or my friends, but neither does the BMorg. If they really wanted to propel the event on to bigger and better things they’d find out what inspires these legions of new burner artists of the Oughts. Why do these people keep pouring their heart, souls, and money into Burning Man projects in the face of crap themes, annoying bureaucracy, asinine yahoos, and ever encroaching police state atmosphere?

But no all we get is even worse themes such as next year’s American Dream, which has to be the most reprehensible themes yet. Obviously, the new theme doesn’t represent the hordes of international burners, but it also rejects the massive number of Burners who go to the Black Rock Desert to escape from the politics and flags they live under.

I know I’m not alone in this abhorrence. Of course many will just ignore the theme and continue to create beautiful art and community, as they have in years past. However, won’t it be better to find a theme that inspires and supports rather than insults and divides?

What’s gone right in the past several years

Rather than just rant, I thought I’d end this with a few words on the positive things I’ve seen happen from the larger Burning Man event:

* I know I had more connection to Saturday’s burn than I ever had to any other Man Burn. Burners came by day and night to see how the rebuild was progressing, and for once the Man was just like any other art project on the Playa. It was a tangible entity, with real people behind it rather than a spectacle already in place on Monday.

Personally I think the Man should be built this way every year: sure prefab it ahead of time, but start putting it together on Monday and have it raised Wednesday or Thursday, so that the participants can see the work that goes into it. Sure some Man Krew would rather not work during the Burn like this, but I know I would, and I’m sure I could find several others that would join in.